I was just gifted the Weelicious cookbook and WOW!  I have so many stickies ready to go I don’t know where to start.

I was feeling stagnant in the snack department so I tried the Date Nut Bites.   It was a relatively easy prep that both girls could “help” with AND half the batch was gobbled up as I was rolling the balls in coconut.

It’s a great finger food as it is pretty soft.  You could be sure to grind the walnuts extra fine and leave out rolling it in coconut for those more texture sensitive kiddos. 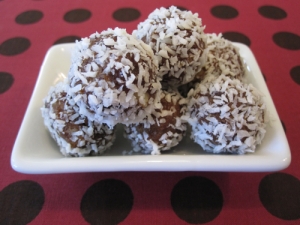 Puree dates and walnuts in a food processor until smooth.  I did these separately with my Bamix,  then mixed with a spatula in a bowl.

It suggested to roll a tsp of the mixture into your hand and then coat with the coconut.  I found it a bit sticky for this method.   I dumped a tsp or less of the mixture right onto a plate of coconut and then rolled into a ball.

Delicious!  They were even better frozen!